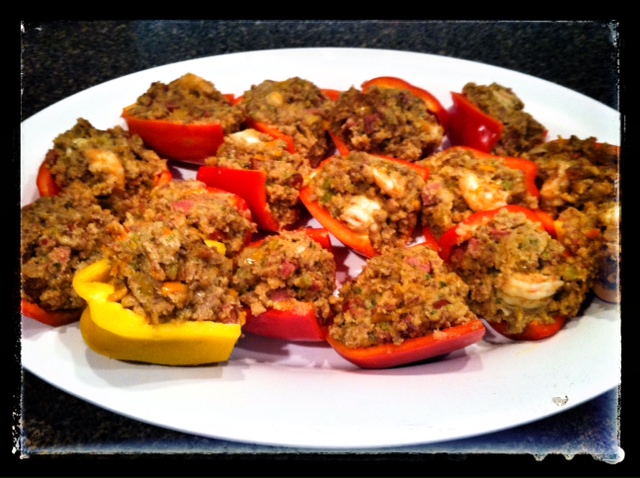 I recently lost my 90 year old grandmother in New Orleans. She was a beautiful woman whose personality and food was renown all over New Orleans. When I first relocated to New Orleans, she was living on St. Denis Street, directly across from Dillard University, awaiting the rebuilding of her home in the lower 9th ward which Hurricane Katrina all but destroyed. It was on St. Denis Street that I began to take an interest in developing my cooking style. I could cook “well” prior to moving to New Orleans, but Mother White (my grandmother), taught me how to elevate my food to the maximum level. It is in New Orleans that food became my way of showing love. Together, we would prepare stuffed bell peppers for Thanksgiving and Christmas dinners. It’s important to note that in New Orleans, the preparation of stuffed bell peppers varies based upon the neighborhood. Typically, those in the 7th ward would use tomatoes and/or tomato sauce in their stuffed bell peppers and rice. Another way to prepare this recipe is to omit the beef and sausage and instead add fresh crab meat with the shrimp. Mother White said that, “[my] food will get you a husband and keep him.” We’ll see.

Serve with baked macaroni (and cheese) and a green vegetable such as green beans.

1 lb medium or large sized fresh (gulf if available) shrimp heads removed, peeled, and deveined; each cut in half

Once vegetables are translucent, add ham/sausage and ground beef. Cook until beef is no longer pink. Add shrimp. Cook until shrimp is pink. Be careful not to over cook, shrimp will become rubbery.

Cut 6 bell peppers in half lengthwise. Remove seeds and membrane. Spoon dressing (bread, meat, and vegetable mixture) into each half. Place on lightly oiled baking sheet.

Bake at 350 degree F oven for 30-45 minutes or until peppers are softened. FYI to cut cooking time down, blanch peppers in hot water for 5 minutes after cutting in half.

Search for Your Favorite Posts